The 44th DAKAR Rally is approaching by leaps and bounds. It will start on 2 January 2022 and the professional racing team FESH FESH is fielding its largest ever fleet in terms of the number of race specials and support vehicles.

At the time of this press release, the Ostrava FESH team’s fleet of vehicles is on its way to Marseille. Final preparations preceded the departure – fine-tuning details, driving the vehicles, finalizing the new team design, and most importantly – packing a huge amount of material into four escort cars. “There’s a lot to do this year. We’ll be taking care of four specials and a total of 32 team members”, comments Radovan Skybík, manager of the development centre, who is coordinating the preparatory work, on the situation before departure. “We are loading equipment for the implementation team and crews, spare parts, tyres for the race specials, completing all the necessary documents”, adds Radovan Skybík about the demanding preparation before departure. “This year we are among the first to leave because our fleet includes Radovan Kazarka’s T815 4×4 “Puma” special, which is running the DAKAR Rally in the Classic category. For this category of vehicles, the technical inspections are already on 25 November in Marseille”, says Tomáš Vrátný, FESH FESH team boss and pilot. So let’s take a look at the Dakar fleet of the FESH FESH team, which consists of 10 cars in total, the most in their history. 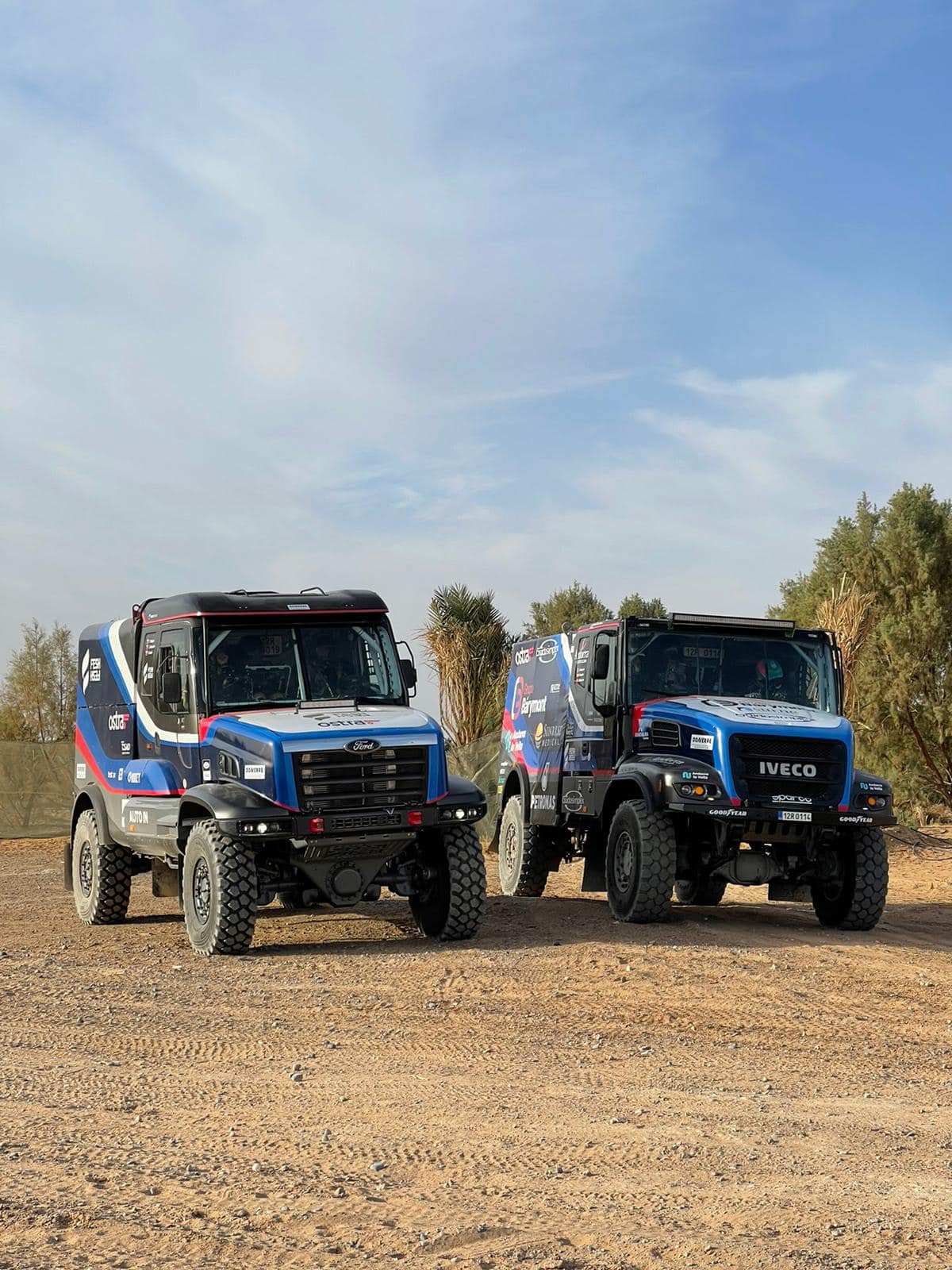 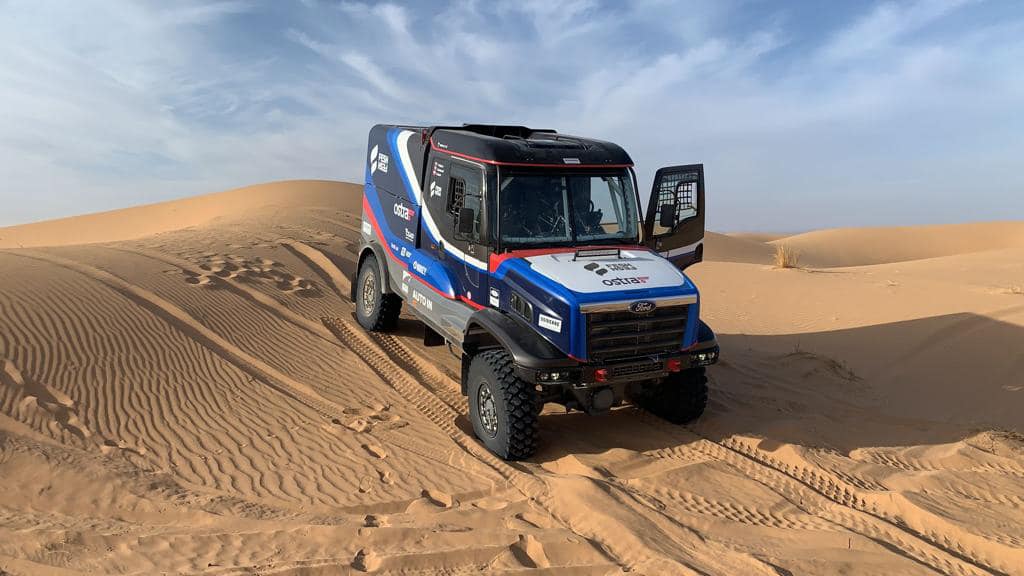 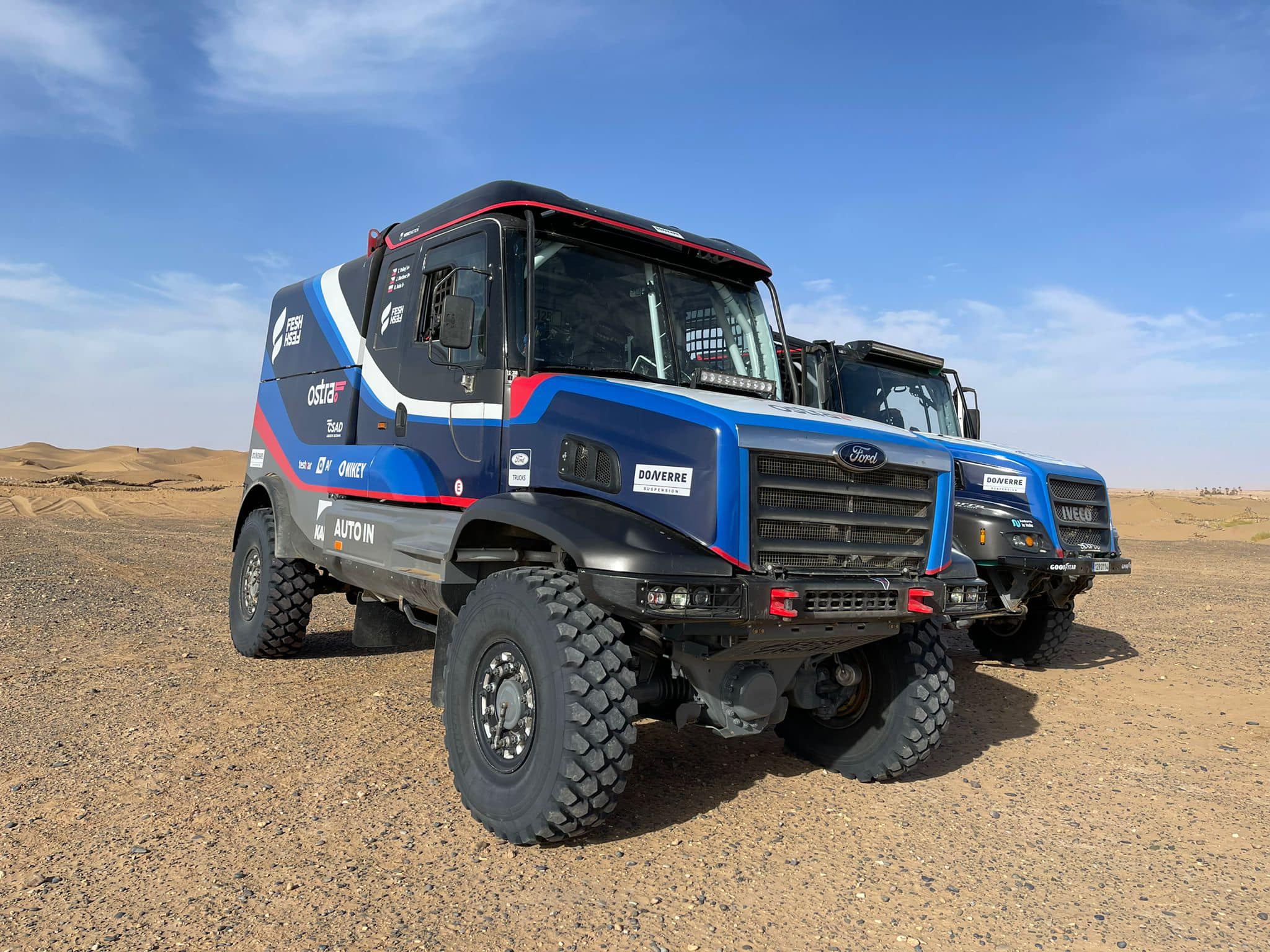 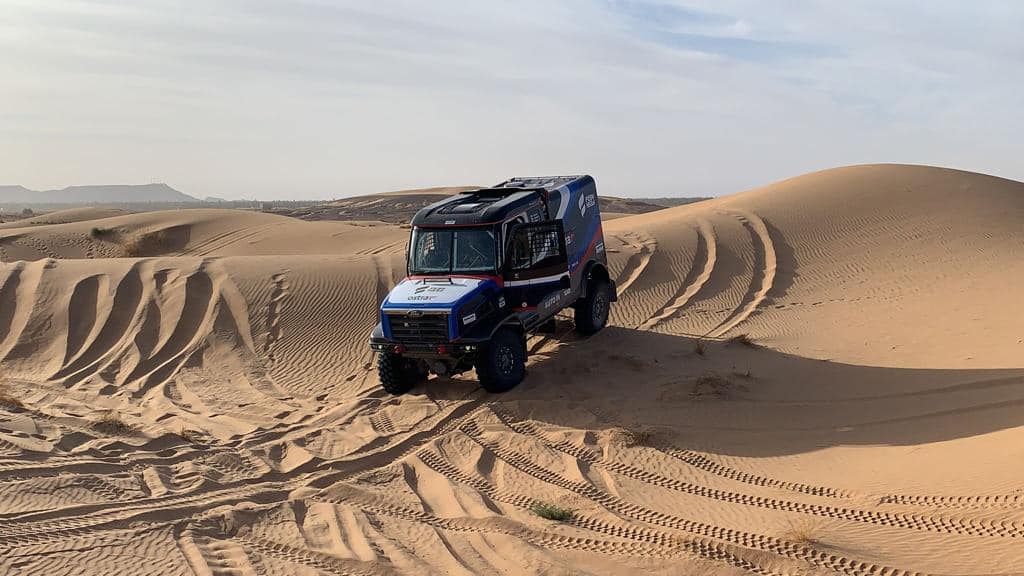 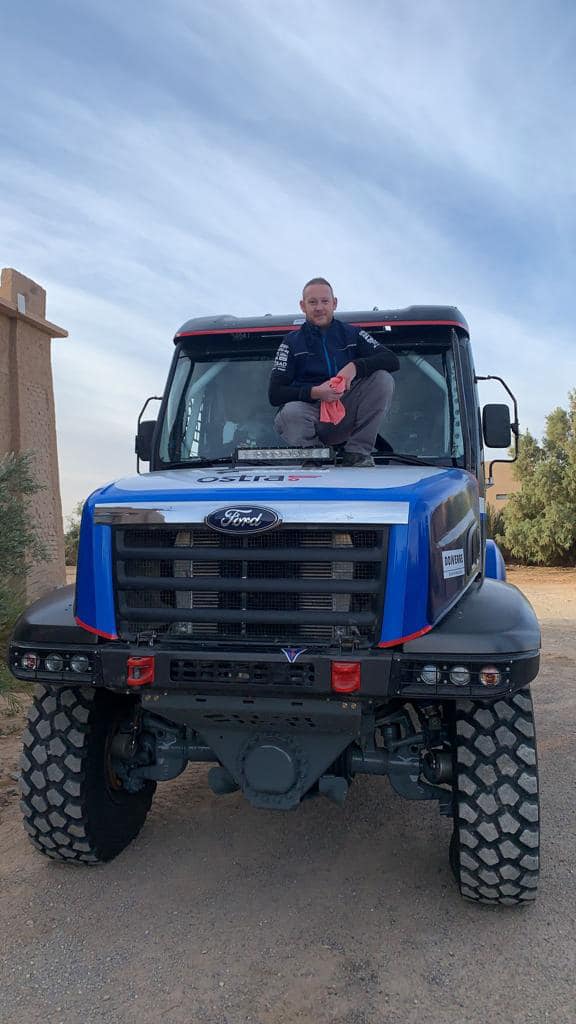 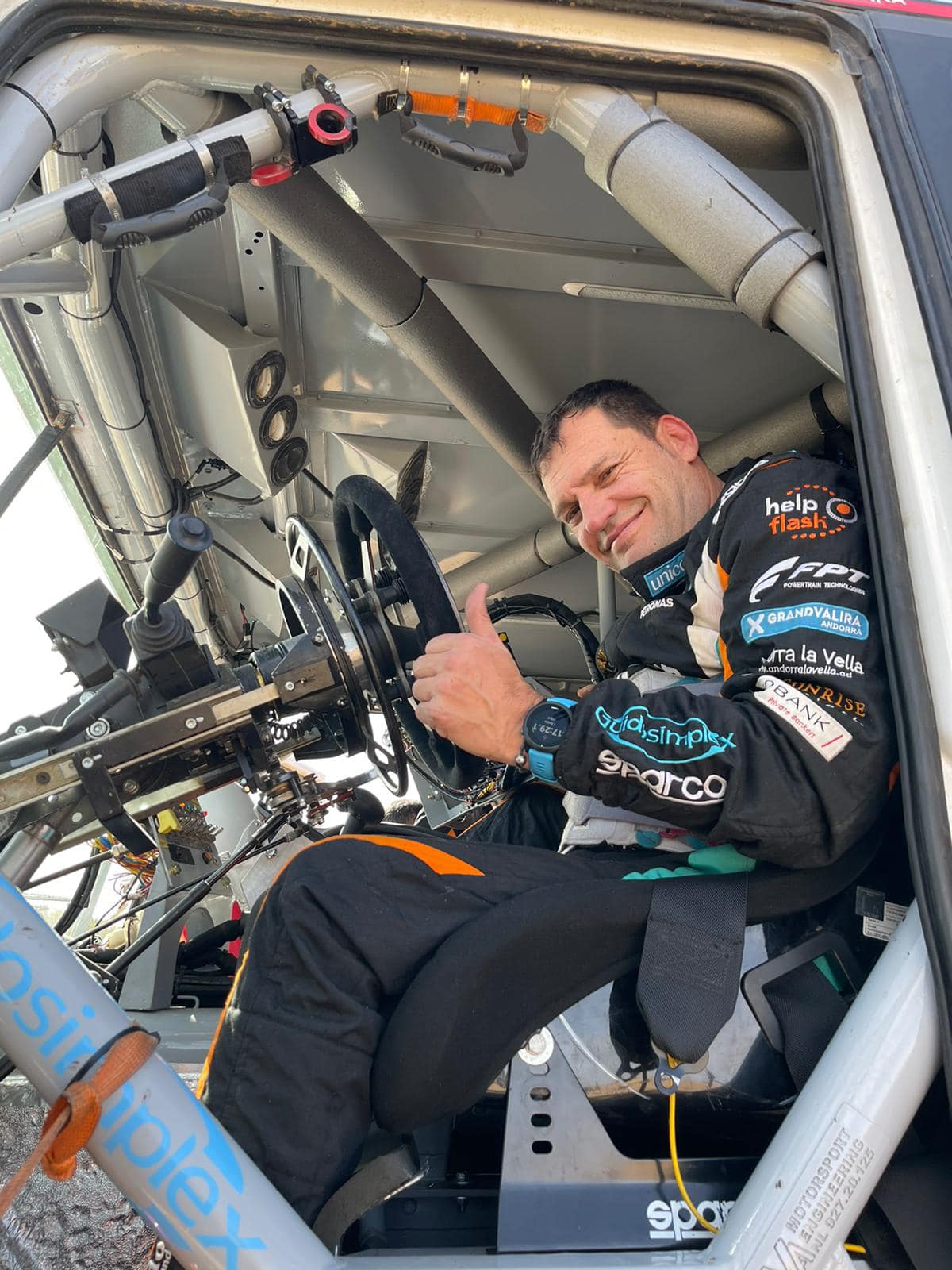 This racing special will be making its Dakar debut. It has been with the team since 2020 and its first live race was this year’s Baja Spain, where its crew took 3rd place. A month after the Spanish rally, the Ford crew won the Drawsko race. This race special is equipped with a 13-litre Renault DXi engine, producing 1,000 horsepower and 4,500Nm of torque. Shifting is handled by an Allison automatic transmission with 6 forward and 1 reverse speed. The vehicle is built on a Tatra chassis with a central support tube. The Ford will be piloted by Tomáš Vrátný, the on-board mechanic will be Jaromír Martinec and the navigator will be Polish racer Bartolomiej Boba, who has been working with the team since 2020.

“We decided to go to Morocco with Ford and Ivec before Dakar to test them in the dunes. We are satisfied with the result of the tests and both specials are already on their way to Marseille”, adds Tomáš Vrátný on the preparation of the equipment.

The racing special, also nicknamed “Torpedo”, was added to the FESH FESH team’s fleet last year in order to prepare for further cooperation with Alberto Llovera, the Andorran disabled driver. “In 2016, I completed the Dakar Rally for the first time in a truck with Tomáš Vrátný’s team from Ostrava. And I decided to return to this fantastic team because of its “family atmosphere” and great team facilities”, comments Albert Llovera on his decision.

The Iveco is equipped with a 13-litre IVECO Cursor engine, also with 1,000 hp and 5,000 Nm of torque. Considering the pilot’s needs, a Guidosimplex manual throttle control and brakes are installed in the vehicle. An Allison six-speed automatic transmission is also available to the pilot.

He has been driving for the FESH FESH team since 2012 and has already completed 7 Dakar rallies. His last participation in the Dakar was in 2020 with the Polish crew R-SIXteam, which finished in an excellent 18th place. This Tatra is powered by a 13-litre Renault DXi13 engine with 700 hp and 3,500 Nm of torque. The pilot shifts through a 16-speed manual ZF gearbox. This special will be driven by a Lithuanian crew consisting of pilot Vaidotas Paskevicius, navigator Slavomir Volkov and mechanic Tomas Guzauskas. “Vaidotas fell in love with our Jamalka last year during the tests in Drawsko. I am glad that he decided to do the Dakar with us and fulfill his long-standing vision. He is very hard-working and I believe he will get a great result”, Tomáš Vrátný introduces the TATRA Jamal team. “Jamalka does not have a uniform team design due to the conditions of the main sponsor of this crew”, adds Tomáš Vrátný about the colours of the special with the Lithuanian crew.

Since 2019, the Dakar Classic category, which is a race for vehicles manufactured before 2009, is also being run. The Dakar Classic starts on 1 January, with 150 crews taking part, including the crew of the Tatra 815 4×4 with the starting number 901, which is supported by the Fesh Fesh team.

The Tatra 815 race special, is owned by Slovak businessman and pilot Radovan Kazarka. “I love Tatra cars, I have been around cars and driving all my life. When the opportunity to buy this eight-seater came up, I didn’t hesitate for long. The inspiration for its conversion was the legendary “PUMA” by Karl Loprais. A group of mechanics from the KAR-mobile in Sumperk tuned the special including the superstructure. We decided to adapt the colour scheme to the new team colours, and at the same time we projected a piece of our Slovakia into it”, Radovan Kazarka introduces his special.

The vehicle is powered by a 12.7-litre, air-cooled Tater engine with 340 kW of power and 2,100 Nm of torque. Maximum speed is 145 km/h. The original Tatra gearbox has 12 forward and 2 reverse speeds. Suspension is by air bags and all semi-axles, supplemented by torsion stabilizers and Donerre shock absorbers.

The crew of the “Puma Fesh Fesh Slovakia” team consists of pilot Radovan Kazarka, mechanic Robert Kasák and navigator is Dakar Rally legend Josef Kalina. The special Tatra 815 “Puma” will start from the second position and thanks to this and the composition of the crew will be a closely watched vehicle in the “Classic” section.

The 2022 DAKAR Rally starts on 2 January in Ha’il, north-western Saudi Arabia, where the convoy of all race and support vehicles will have to move after arriving in Jeddah. That’s where the route of the world’s toughest long-distance rally will bring them back after 13 days and where the rally will finish on 14 January.

The entire route is in Saudi Arabia. Despite the well-known stops, 80% of the route is to be new. After a one-year break, the competitors will return to the Desert region. This is a desert area the size of France in the south-east of Saudi Arabia, which will help the fact that it is once again set to be a diverse race full of challenging dunes. There are a total of 3 stages scheduled there and a challenging Marathon stage.

From Hail, the competitors will head southeast along the border with Qatar, just into the Desert region. They will then return northwards to Riyadh. There, a rest day is also planned. From Riyadh, it will then continue west to Jeddah.We will bring you detailed information from the DAKAR Rally via Facebook and Instagram on the FESH FESH accounts and via the internal Google Currents network. You can then follow the fortunes of all the crews online at www.dakar.com via the live webcast or via the downloadable app on the website.

Video introductions of the crews can be found on YouTube here: https://bit.ly/dakar2022_feshfesh